Skip to content
of the Royal Bahraini Air Force

1st Fighter Wing was formed in 1985 to control the RBAF fighter units. Initially based at Bahrain International Airport (Manama), the unit later moved to Shaikh Isa Air Base.

This page gives details of the air bases and airfields which are, or have been, used by the Royal Bahraini Air Force.

(Google map to be added).

This section describes and illustrates the various national insignia used by the Royal Bahraini Air Force since its formation:

1985-present
In 1985 a new roundel was introduced, featuring the national colours of brick red and white. The national flag fin flash was unchanged. The main marking is normally displayed on the fuselage sides of helicopters, and USAF-style positions on fixed-wing aircraft (i.e. fuselage sides and upper port wing and lower starboard wing). The abbreviation BAAF is carried on the upper starboard and lower port wing of fixed-wing aircraft. The service titles ROYAL BAHRAINI AIR FORCE in Arabic and English are carried on the fuselage sides of all aircraft and helicopters (replacing the previous BAHRAIN AMIRI AIR FORCE titles).

by the Royal Bahraini Air Force


This page gives details of some of the aircraft types that were offered or promised to the Royal Bahraini Air Force but not delivered, cancelled official orders, and types have been falsely reported as being in service.

Northrop F-20A Tigershark
Four F-20As were requested in 1982, along with two F-5Fs for conversion training, but the order size was insufficient to justify starting F-20 production and the US offered to supply F-5E aircraft instead. Source: World Air Power Journal Vol 25 Summer 1996 p.90.

The following aircraft types have been reported as serving with the BAAF, but actually serve with the Royal Flight:
Gulfstream II, Boeing 727, Boeing 747SP, Gulfstream III. 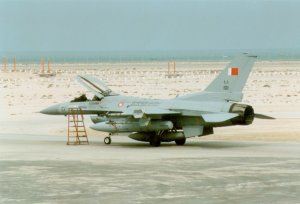 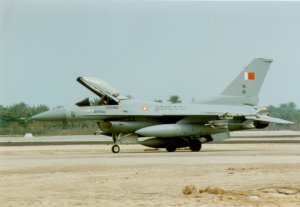