The title of ‘Vestnik Aviatsiyi i Kosmonavtiki’ translates as Bulletin of Aviation and Cosmonautics. It also carried the subtitle ‘Aerospace Herald’ in English. Each issue typically had 96 pages, with 122 photos, and 1 large insert. This magazine is described as a reincarnation of ‘Vestnik Vozdushnogo Flota‘. The printed magazine ceased publication at the end of 2014, but the publishers website continues as an aviation news portal, now rebanded as Aerospace Herald.

First issue available in 1997. Published bi-monthly until issue 6/2013, then to twice yearly from 1-2/2014. It ceased printed publication after the 3-4/2014 issue.
The editor was Manushkin Valery Alexandrovich.

The title ‘Vestnik Vozdushnogo Flota’ means Air Fleet Herald. It was formerly the Soviet-era magazine ‘Aviatsiya i Kosmonavtika‘, with just a name change. Each issue had 64-72 pages and was highly illustrated, with many photos – mostly in colour, plus line drawings and colour profile drawings. For the time, it had notably good colour photo reproduction. The feature articles exclusively concentrated on modern and historical Russian aircraft types and aviation.

First published under this title in September 1994 and published bi-monthly until issue no.56 (Nov/Dec 2003) when it ceased publication.
The editor-in-chief was Antonov Nikolay Anatolevich.

‘Vozdushno-kosmicheskaia oborona’ (Aerospace Defence in English) was a magazine devoted to the history, equipment and weapons of air and missile defence. It primarily looked at air defence missiles, their launcher systems and the networks they integrate with. Each issue had 48 pages, illustrated with photographs.

First issue on sale 15 My 2001. Published bi-monthly to the end of 2015. Ceased publication after 6/2015 (issue 85). The publisher for the first few issues was RA “Intervestnik”, which also published the aviation magazine ‘Air Fleet’. This later changed to Almaz-Media which subsequently became VPK-Media.
The editor-in-chief is Mikhail Khodarenok.

See the official website below for the main articles in each issue.

‘VVS segodnia’ (Air Forces Today in English) is the official newspaper of the Moscow Air Defense Force and Air Force command. It carries the subtitle Gazeta Voenno-vozdushnykh sil Rossiiskoi Federatsii. It appears as a twice a week 8-page newspaper. Like ‘Krasnaia zvezda’ it is available to a wide circle of readers by subscription.

Until September 2002, this newspaper was published as ‘Na boevom postu / На боевом посту’, which means At the Combat Post. Also produced twice a week, this was a real newspaper – printed in black and white on newsprint paper. The paper had been published under this title since 1938 for the Moscow Air Defence District.

Published twice a week from 1938 as ‘Na boevom postu’. Renamed ‘VVS Segodnia’ in September 2002.
The editor is unknown. 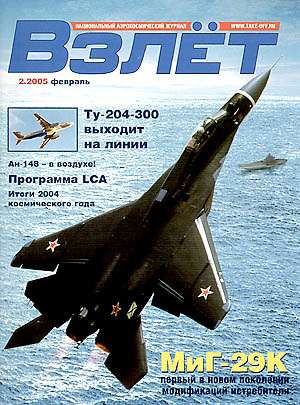 ‘Vzlet’ (Take-Offin English) is a magazine dedicated to Russian civil and military aviation. It carries the subtitle (Natsional`nyj aerokosmicheskij zhurnal (Russia’s National Aerospace Magazine). The magazine covers aerospace news and events; review and analysis of aerospace technology development and operational issues; interviews with industry newsmakers; articles on aviation history. Each issue has 48-96 pages and is illustrated the colour photographs.

PDF versions of all back issues are available on the publishers website.

The publisher produces a special english-language edition called ‘Take-Off’ for distribution at the major international airshows. This means about 4 issues per year. The contents is mostly direct translations of articles from the regular magazine. 48 pages in each issue.