‘Aero’ was published quarterly by Boeing Commercial Airplanes and distributed at no cost to operators of Boeing commercial aircraft. It provided operators with supplemental technical information about Boeing and Douglas aircraft. It included features about safety and maintenance. Issue 1 was dated January 1998. Publication of ‘Aero’ magazine was suspended with the July 2003 edition. 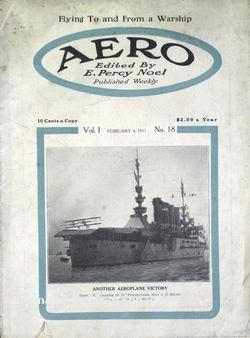 Weekly news magazine edited by E. Percy Noel. Vol.1 No.18 was dated 4 February 1911. Later subtitled ‘America’s Aviation Weekly’. One of the leading American aviation magazines of the period. It evolved into ‘Aero and Hydro’. 54 pages each. Continued until at least April 1912.

The American Aviation Historical Society was founded in 1956 as a non-profit making educational organization. The primary objective of the organization is the preservation and dissemination of the rich heritage of American aviation. The AAHS publishes ‘AAHS Journal’ quarterly and also ‘AAHS Newsletter’ [ISSN: 0300-6875] which provide information on interesting and often little known facts associated with American aviation.
‘AAHS Journal’ has been published since the Spring 1956. It features articles on rare aircraft types, US pilots, airlines, aircraft markings, and many other topics. It is an A4 size publication with 100 pages in each issue, illustrated with b+w photos, colour illustrations and scale drawings.

A magazine focusing exclusively on buying and selling private aircraft. Each issue includes a directory of aircraft for sale, details of dealers and brokers, products and services buyers guide and various articles dealing with aircraft ownership issues. The magazine offers readers a pictorial selection of nearly 1,000 aircraft for sale worldwide. Its monthly “Flight Watch” section covers the news and market trends in the resale marketplace.

Also known as ‘Air Wars 1919-1939’, although the above title is the formally correct one. Initially subtitled ‘The Aircraft and Air Warfare in the Middle Years’ – this was later revised to ‘The Aircraft Military and Civil of the Golden Years’. Each issue had up to 40 pages, comprising feature articles, photos and line drawings of military, civil, sporting and racing aircraft. Some issues include flying scale model plans, with 3-view drawings of special interest to modellers.

First issue dated March 1985. Published quarterly until issue 29 (Summer 1992) when it ceased publication.
The editor was A. C. Anson.

Text to be added on the development of aviation in the United States.

The registration prefix ‘N’ with numerical registrations has been used from 1927 to the Present; eg: N856FT. An unofficial N-prefix with letter registration sequence was used 1921-1927.

Each State (except Hawaii) has a State Police force, (sometimes called the ‘Highway Patrol’ or ‘Department of Public Safety’), nearly all of which operate helicopters and/or aircraft.

In addition to the above, a number of states have other organisations which operate helicopters and/or aircraft:

At least 200 now defunct aircraft manufacturers were based in the USA. Another 127 or more are still active.

Civil Airports and Airfields Listing
Airports in the United States