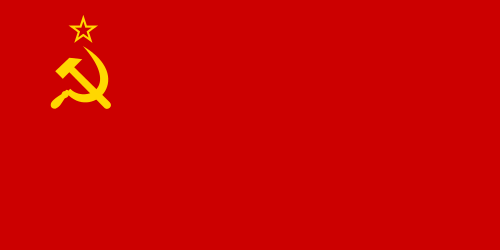 The USSR, or Soviet Union, was a country in Eurasia what existed between 1922 and 1991. It was the largest country in the world. It had land borders with Norway and Finland in the north west, Poland, Czechoslovakia, Hungary and Romania in the west, Turkey and Iran to the south west, and Afghanistan, Mongolia, China and North Korea to the south. It had maritime borders with Japan and the US state of Alaska.

The terrain of the USSR mostly consisted of huge flat plains, which were heavily forested in the north and mostly steppe grasslands in the south. The northern coast was mostly Arctic Tundra, with permafrost soil and few trees. The Ural Mountains formed a north-south range which divided Europe from Asia. In the south west, the Caucasus Mountains ran close to the border with Turkey and Iran. In the south the Altai Mountains ran along the border with Mongolia. The far eastern region had a number of mountain ranges, including the Verkhoyansk Range in Siberia and the Kamchatka Range on the Kamchatka Peninsula. The USSR had a very long coastline, and also thousands of rivers and lakes. The largest lake was Lake Baikal, located near the border with Mongolia, which is the world’s most voluminous freshwater lake. It also shared the Caspian Sea with Iran. The land area is 22,402,200 square kilometres (8,649,500 square miles).

Text to be added on the development of aviation in USSR.

Airports in USSR – to be added

This is a survey of Russian and Soviet aviation, defence and aircraft scale modelling magazines. All magazines are Russian (Cyrillic) text only, unless otherwise stated.

The years between 1974 and 1985 brought many changes to the Soviet Union’s Air Force (SAF). Changes that augmented the SAF’s overall combat capability almost to a point of challenging the West invaluable air dominance in the projected battlefield. This was a dramatic shift that caught many Westerns observers by surprise. After decades of overall decay in the SAF’s structural profile, the 1970s ushered as new era in air operational planning. The Kremlin had finally woken to what conventional air power was really about.

Since its creation, the North American Treaty Organization (NATO) had planned to counter the overwhelming numerical superiority of the Warsaw Pact ground and air forces with their high tech air forces. At the front point of this assumption rested the idea that the Western powers could bring heavy concentration of fire to bear with extreme speed and unmatched accuracy at any point in the battle. It was always understood that, even if NATO had the manpower in strategic reserve to counter an all out attack by the Warsaw ground forces, the incorporation of those forces into the defensive forward positions would have taken time. It would not arrive in time to stall a Soviet-lead push into Western Europe. How to contain the Warsaw ground forces from breaking out.

For NATO, air power filled this gap. It offered the ability to strike hard and repeatedly at the choke points along the two Germany’s frontiers where the Warsaw land offensive would have to squeeze through. At the same time, tactical implementation of air power would be projected strategically because a large amount of American tactical aircraft would fly to Europe in the event of an all out attack. The concept of Allied air power holding the front against a Soviet ground incursion, provided there were enough deployed aircraft to do it, was valid and reassuring, especially since the performance of modern tactical Allied aircraft, and the effectiveness and accuracy of their weapons, had climbed exponentially on the back of commercially competitive Western technology to achieve an overall capability undreamt of in term of World War II. Inside NATO’s war planning, this air superiority had long been a comfortable thought of state that many believed that it would endure forever. Bu by the early 1980s, the situation looked different.

Red Air Force combat jet aircraft made its world debuted in the Korean skies during the 1950s affair. By the early 1970, all of those, first generation aircraft, were withdrawn from active service. The second generation of fighters and bombers, originally designed in the late 50s and early 60s, reached its developmental peak in the early 70s.
By the mid 80s, only about 10 to 15 percent of second generation air platforms remained in front line service as the third generation began to assert itself on the overall force structure. Third generation fighters and bombers made their debuted in the early 1970s thus its numbers rose steadily through the decade. It was this generation that gave the Red Air Force a broadly force structure comparable to that of its Western counterparts, although the later were still reckoned to have a margin in detail capability in all aspects, especially where this was dependent on electronics and weapon technology.

A pair of IL-28 Beagle bombers. (photo, via author)

On sheer numbers of available airframes, the Warsaw Pact had always outstripped those of the Allies, in the mid 80s; broad parity in performance was also within its grasp. Added to the equation was the Soviet’s monumental investments in research and development with dwarfed that of all NATO nations combine, with the exception of the US. A fourth generation platform was well under development by the middle of US President Ronald Reagan’s first term. By 1985, the Red AF was in the process of completing pre-evaluation of its fourth generation, air superiority fighter. A platform sorely intended to out maneuver the premier US air superiority aircraft, the vaunted F-15 Eagle. The Soviets were also working on a dedicated V-STOL aircraft for naval operations.
In the summer of 1985, analysis estimated Russian tactical air forces in the western section of the country had increased by 35 percent. The Soviet naval air arm was also climbing. The number of strategic airlift airplanes and attack helicopter quadrupled between 1974 and 1985. In twenty five years, 1970 onward, the Red AF increased their operational scope and war-load capacity by a staggering 1000 percent. The air force progress was as equally impressive as the Red Navy’s. Admiral Gorshkov gets much of the credit, and deservedly so, for the development of the Navy’s Blue Water aspects; but Soviet AF generals are to be praised for the formation of a top rated force.

With its overall new power projection capability, the Red Air Force possessed the capability to venture into the Atlantic and engage NATO’s European targets, including the most important air bridge base in the Continent; the United Kingdom. A though inconceivable in 1970. The new found Red air power could, if the pattern continued for one more decade, have made the deployment of US strategic reserve units into Continental Europe that much difficult, if not impossible. In conclusion, Soviet generals believed that they were just 10 to 15 years away from having a war winning air strategy.